Updates to Gini's profile since your last visit are highlighted in yellow. 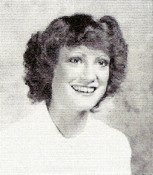 Yes! Attending Reunion
Send Gini a private message
Class Year:
1982
Where do you live now?
Duchesne, UT USA
Kids?
We have six children
Stephanie born 1981, married to Jason Peterson and they have 4 kids
Caleb More…born 1983, married to Gina Myrup and they have one son and a baby girl on the way in June.
Colton born 1988, serving in the U.S. army and now stationed in Fairbanks Alaska.
Wesley born 1992, Almost home from his mission in the Washington, Everett Mission. He will be home June 3rd.
chelise born 1994, living in Provo Utah and working as a receptionist at a nursing and rehab center.
Jaden born 1998, DHS
Where else have you lived?

Provo, Pheonix Az., Northern CA. , southern CA. and back to Duchesne in between each one, Mostly Duchesne

Oh Ya, 5 of my siblings and my Mom, not to mention numerous cousins and in-laws

Comment
How often do you get back to Duchesne?

Comment
Do you still see/talk to/hang out with any classmates? Who?

My High School friends and I still have a slumber party every year and Keep in touch by E-mail,
Leisa Moon Roberts, Teresa Rowley Liddell, Leisa Burdick Cook, Annette Lewis Hepner, and Toni Jensen Chatwin.
Plus numerous other class mates who live around Duchesne area.

Comment
What did you do right after high school?

Got Married , Moved to Provo and played like we were grown ups.

I am a stay at home Mom and do work for my husband on the side for his Survey company, I do research and take care of all the secretarial work.

I married Rodney Rowley (Class of 1981)
We were married right after he graduated in June of 81 and have been married almost 32 years.

Spending time with my husband and family.
I love to hang out with my Sisters when ever I get a chance.
I also love to do things with my friends.
Our family likes to go camping, hunting, four wheeling, snow mobiling and repelling.
I like to read and cook.

Everything....
Trying out for Homecoming Queen and not making it, but the slumber party after was great.....
Sitting on the heater if we could ever get there first.
Hanging out with the rest of the Hogs.
Getting grounded from Arla's car on School grounds, by Principal Horrocks.
classes with Mr. Aycock

Homework, Not much else, I loved the social party of School.

Comment
What would we be surprised to know about you?

I have jumped off a 85 foot cliff, (ok, repelled) which is quite a thing since I have had nightmares for years about cliffs.
Have tried out Scuba diving and loved it, now to certify.

Our beloved husband, father, son and brother, Michael Troy Carter, age 28, of Duchesne, died December 6, 1993 from injuries sustained in an automobile accident. He was born August 23, 1965 in Ogden, Utah, to Allen D. and Glennis Price Carter. He married Margie Lee Lund, January 19, 1985 in Duchesne, Utah. Their marriage was solomnized in the Provo LDS Temple, June 9, 1990. Mike was employed as a machinist by Uintah Machinery and truly enjoyed his work. In his spare time he liked to camp and fish and dutch oven cooking was his specialty. He was an active member of the LDS Church, where he was a great Boy Scout leader. He was a military veteran, having served in the U.S. Army. He is survived by his wife, of Duchesne; children, Matthew Allen Carter and Nicole Carolyn Carter, both Duchesne; parents, Glennis and James Ponton, Myton, Utah; and Allen and Mary Carter, Chicago, Illinois; father and mother-in-law, Karl and Jackie Lund, Duchesne; brothers and sisters, Raymond Allen Carter, Tracy Boyde Carter, Valerie Killian, Connie Muir. Preceded in death by a brother, Thomas Porter Carter. Funeral services held at 12 noon Friday, December 10, 1993 at the Duchesne LDS 3rd Ward, where friends may call Friday, 10-11:45 a.m. Burial in the Duchesne City Cemetery under the direction of the Hullinger-Olpin Mortuary, Roosevelt. Military honors by the Duchesne American Legion Post #22. Salt Lake Tribune, The (UT) Date: December 9, 1993